Clear All Selection
Browse thyme suppliers by country and region. 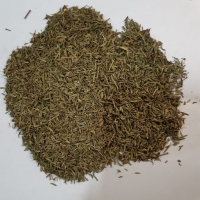 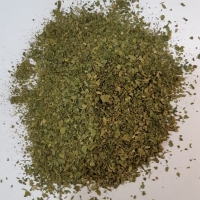 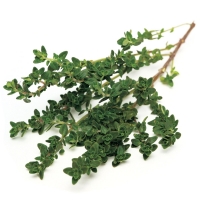 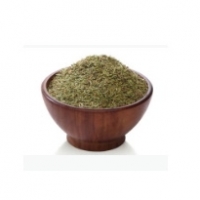 Thyme is producing from our farms in a High Quality , Our products are cultivated and dried according to ISO standard. and using in many fields such as : Aromatic Industries , Food , Pharmaceutical and Oils , Spices and Feed. Packaging Terms : 10 KG, 15 KG, 20 KG :- Paper and Bags. Lowest Quantity : 1x20' FCL. Shipping Terms : FOB. Port : World Wide.

Thyme is the leaf of a low-growing shrub in the mint family called Thymus vulgaris. Its tiny grayish-green leaves rarely are greater than one-fourth inch long. For use as a condiment, Thyme leaves are dried then chopped, or ground.

Thyme (pronounced time) is a fragrant, small-leafed, woody-stemmed culinary herb that is used frequently in the Mediterranean, Italian and Provençal French cuisines. It pairs well with lamb and tomatoes and is often used in soups, stews, stocks, and sauces.

Thyme (/taÉªm/) is any member of the genus Thymus of aromatic perennial evergreen herbs in the mint family Lamiaceae. Thymes are relatives of the oregano genus Origanum. They have culinary, medicinal, and ornamental uses, the species most commonly cultivated and used for culinary purposes being Thymus vulgaris. Ancient Egyptians used thyme for embalming.[1] The ancient Greeks used it in their baths and burnt it as incense in their temples, believing it was a source of courage. The spread of thyme throughout Europe was thought to be due to the Romans, as they used it to purify their rooms and to "give an aromatic flavour to cheese and liqueurs".[2] In the European Middle Ages, the herb was placed beneath pillows to aid sleep and ward off nightmares.[3] In this period, women also often gave knights and warriors gifts that included thyme leaves, as it was believed to bring courage to the bearer. Thyme was also used as incense and placed on coffins during funerals, as it was supposed to assure passage into the next life.[4] The name of the genus of fish Thymallus, first given to the grayling (T. thymallus, described in the 1758 edition of Systema Naturae by Swedish zoologist Carl Linnaeus), originates from the faint smell of thyme that emanates from the flesh Thyme is best cultivated in a hot, sunny location with well-drained soil. It is generally planted in the spring, and thereafter grows as a perennial. It can be propagated by seed, cuttings, or dividing rooted sections of the plant. It tolerates drought well.[6] The plants can take deep freezes and are found growing wild on mountain highlands.

Product Name: Thyme Available Form: Rubbed Leaves Powder Availability time: Leaves products could be available after the harvest duration. Products are available in our stores during the whole year.

Product Name: Thyme Available Form: Rubbed Leaves Powder Availability time: Leaves products could be available after the harvest duration. Products are available in our stores during the whole year.

Almanar For Import And Export

Thymus vulgaris is a commonly used culinary herb. It also has medicinal uses. Common thyme is a Mediterranean perennial which is best suited to well-drained soils and enjoys full sun. Thyme is widely cultivated for its strong flavor, which is due to its content of thymol. Thyme is best cultivated in a hot, sunny location with well-drained soil. It is generally planted in the spring, and thereafter grows as a perennial. It can be propagated by seed, cuttings, or by dividing rooted sections of the plant. It tolerates drought well. Especially in the Mediterranean cuisine, thyme is in broad use and gives many foods their characteristic flavor. Thyme is often used to flavor meats, soups and stews. It has a particular affinity to and is often used as a primary flavor with lamb, tomatoes and eggs. Thyme, while flavorful, does not overpower and blends well with other herbs and spices. Thyme is also a very old medicinal plant, which is put to use especially in the case of diseases of the respiratory tract. Its flowers are an excellent honey plant. Organic & Conventional Thyme Cut: Origin: Turkey Botanical Name: Thymus Vulgaris Packing: 10, 20 kg craft bags MOQ: 1000 kg Organic & Conventional Thyme Ground: Origin: Turkey Packing: 10, 20 kg craft bags MOQ: 1000 kg

Thyme is the leaf of a low-growing shrub in the mint family called Thymus vulgaris. Its tiny grayish-green leaves rarely are greater than one-fourth inch long. Luckily, thyme is packed with vitamin C and is also a good source of vitamin A. If you feel a cold coming on, thyme can help get you back in good health. Another health benefit of thyme: It's a good source of copper, fiber, iron, and manganese. Fresh and dried thyme available for worldwide delivery.

Dear, Good morning , iam writing on behalf of "spices alraee company located in egypt cairo" specailized in import and export services,looking forward to making business with you regarding of our products of "natural herbs,and plants and seeds we honored to visit our website" www.spicesalraee.com and here are the products we have,herb&plant and seeds fennel ,Caraway, Aniseed, Cumin seed,Lunum seed,fenugreek and herbs such as :basil leaves,chervil,cilantro,Marjoram, oregano leaves,parsley leaves, and we have all types of powders of seeds and herbs .