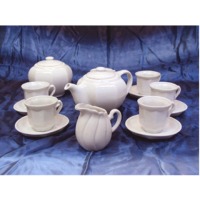 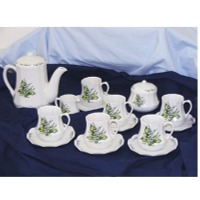 Hungarian high quality porcelain tea sets with 15 parts: The Raspberry tea set and the set with iris motif are including 6 pieces of 150 ml cups, saucers, 600 ml teapot, sugar holder and a lemon juice holder. Nippon 4 parts tea set: including 200 ml cup with saucer, a 100 ml lemon juice cup and a 500 ml teapot. Honey tea set for 1 person: including a 450 ml mug and a tea filter holder with strawberry decor, plus a 300 ml honey jar with plastic honey spoon. 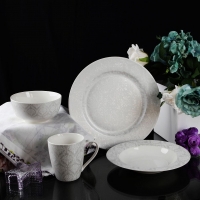 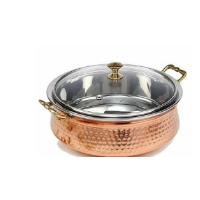 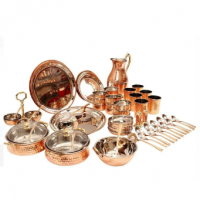 Lebanese ceramic Coffee set, it's made of highest quality, the raw materials are imported from Italy. The coffee set is hand made also hand painted and it consist of 11pc (tray 1pc + coffee pot 1pc + coffee cups 6pc + sugar bowl 1pc + 1 spoon + water shut 1pc). it could be presented as personal gift, used for decoration or even for drinking coffee.

Traditional Turkish Hand Crafts has formed a rich mosaic by bringing together its genuine values with the cultural heritage of the different civilizations which were coming from the thousand years of history of the Anatolia. The handicrafts made with copper, as well as the metals such as brass, gold, silver, are tried to be kept alive today by using high quality workmanship and various designs. Turkish Coffee is the name given to a type of coffee whose preparation and brewing techniques were invented by the Turks. It has a unique taste, froth, aroma, brewing technique and presentationà in other words it has its own identity and tradition. The first coffee was made in the Arabian Peninsula by boiling coffee cherries. The new method invented by the Turks revealed coffee's true flavour and peerless aroma. The Turks introduced coffee to Europe where for many years it was prepared and consumed as Turkish Coffee. Turkish Coffee is made from high quality arabica coffee beans from Central America and Brazil that are blended and carefully roasted, then very finely ground. The coffee is mixed with water and the desired amount of sugar and cooked in a "cevze", or Turkish coffeepot. The coffee is served in small cups. The coffee must be left to stand for a short time after serving to allow the grounds to settle at the bottom of the cup. Love, success, money, fortune: the art of reading coffee grounds is as old as coffee itself. Coffee fortune telling was born out of Turkish Coffee and is an inseparable part of the pleasure and conversation associated with coffee. This ritual spread to Europe at the end of the 17th century when it became fashionable in Paris, from where it spread to Austria, Hungary and Germany. The Coffee Set made of copper is a modernized version of traditional offer.