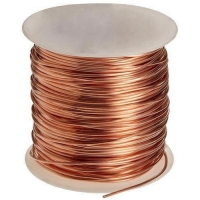 We are manufacturers of Bare Copper Wire up to 30 Gauge. We can supply the material to any specification by the customer. We are ISO 9001, 14001 and 180001 certified and have been in business for over 40 years.

1. Applications Conductor(aac, aaac and acsr) have been widely used in power transmission lines with various voltage levels, because they have such good characteristics as simple structure, convenient installation and maintenance, low cost large transmission capacity.And they are also suitable for laying across rivers valleys and the places where special geographical features exist. 1).The permissible long-time operating temperature for aerial conductor is 70oc. (2).Under the circumstance that rare climate is occuring and ice coverage rate low in heavy ice area, the biggest stress of cable at the lowest point of the sag should not exceed 60% of the short-time destructive power. (3).When connecting conductors, the conductor beside the connecting tube cant be prominent.Otherwise, the force on the operating conductors will be unbalanced.After connectors are install, the connecting tube should be painted by moisture-proof varnish in order to protect it from corrosion. (4).Under installaion, the arc downing stress of all the conductors should be the same.With in the permissible distance of crossing buildings or dropping to the ground, the stress can be 10-15% higher than regular stress. According to your requirement

A very high fiber content, vitamins and minerals, antioxidants, heart health and diabetes protection are just some of the barley nutrition benefits that make it one of the best whole grain choices. Barley is actually one of the oldest consumed grains in the world.

in all sizes are available

Supplier Of Other Medical Equipments

Bare fiber adapters provide a simple and effective way to use un-terminated fibers with commercial Receptacles. Simply strip and cleave your fiber and insert in to the Bare Fiber Adapter. Broken fibers are easily removed with piano wire, allowing hundreds of insertions. They are recommended for power meter hook-ups, temporary system repairs or wherever a quick fiber connection is required. SC, FC and ST bare fiber adapters with stable qualities that use high quality Ceramic Ferrules and precise Fiber connector housing parts, they are used to quickly and easily terminate the fiber to the equipment. PE bag and carton.

Used for weaving Use carton

Supplier Of Other Textile Yarns

Bare Aluminium Foil Specification : Soft Aluminium Foil one side Matt and other side Bright or Both side Bright. Application 1. To manufacturing the LDPE laminated pharmaceutical strip foil suitable for packing the tablet, and capsules. 2. Suitable for Lidding Foil in certain cases with LDPE lamination or by doing the HSL coating. 3. Any other use with the consent of manufacturer. Compliances The product is fully compliant to the tests of FDA, REACH, RoHS and anti-microbiological Detail Description of the product Foil Rolled from Aluminum Alloy - AA 8011 grade imported foil stock conforming to ICH Q3D Schedule, Rolled with FDA approved consumables and international guidelines on Health and Safety. Standard Foil Gauge (mm) Tolerance Limit (±8%) 0.025 ± 0.0020 0.030 ± 0.0024 0.040 ± 0.0032 Packing and Labeling Mode of Packing Sea Worthy Packing Labeling Each Reel / Jumbo Roll is identified with a sticker, which is pasted on the top of roll and has got following information: - Specification/ Gauge/ Width/ Coil no. / Date/ Reel no./ Machine name/ No. of Joints. Test Certificate: The test certificates provided on observed values with standard parameters or mutually agreed format. Above-mentioned specifications are for general guideline only and can be changed as part of continuous improvement programme. The final product specification will be made as per customer requirement

Usage: 10KV outdoor line, power transmission line Type of electric clamping: screw press with flat opening Connect the electrical clamping specification: the gap is 35mm and the maximum opening distance is 65mm Lever specifications: 1 m * 3, 30 mm, outside diameter Ð¤ lever length and diameter can be customized according to user needs. Specification: wire diameter: 25mm, 3*1.5m+ 12m. Length and line size can be customized according to user requirements. Applicable voltage level: 10KV Categories: different voltage grade and use the specific environment of grounding line configuration is different, the same voltage grade different using conditions of the specific configuration of the grounding line also is different, the style of the ground rod length, clips, the thickness of the soft copper wire grounding length, grounding method, etc.).Therefore, the user must clearly understand the specific use environment and the correct voltage grade to select the correct type.

Supplier Of Other Type Of Woods