Plastic cutlery We are manufacturer.Plastic cutlery is one of our main business.We can also according to your requirement to produce since we have special engineer to design and make the mould. Our products are mainly export to usa and european since our high quality and competitive price.We do business with our sincere desire and best service.Please don't hesitate to contact us if you have any demand.Hope to establish the long-term and mutual benefit business with you at an early date.

- Plastic Cutlery (Plated Cutlery; Premium; Mid-Heavy; Heavy Duty/ Extra Heavy/ Fine Selections) In Changya, we are producing around 200 moulds of cutlery for your choices with different color, various dimension/ packaging methods by two mainly particles made of FDA-approved polystyrene plastic for food safety, superior strength and durability. sted catalogue. Various options as you want 100% compostable as you need On time and fficient delivery as you like

Ningbo Changya is a professional factory focusing on plastic kitchenware manufacturing & packing in Vietnam, have main product lines such as Straws, Cutlery, Microwaveable Containers, Serving utensils, etc. Changya provides both Bio & plastic material cutlery, from economic ones to extra heavy weight ones, totally over 200 choices, check them out for detail on our website, , or send us an email for an e-copy of latest catalog. We offer customized products too, if you wish embargo your logo on a cutlery, or make a tool for your own exclusive design, all is open for discussion.

1. Knife, fork, spoon, napkin , sugar, creamer, toothpick as a set 2. Widely used in hotel , airline ect. 3. Different combination All these items can be packed with sugar , creamer, salt/pepper as a set for airline , hotel. We are professional manufacturer on this level. 300set/cs.

Our main products are disposable plastic cutlerys and plates and bowl and cup, material can be PP, PS,PET,CPET,PLA,PSM ect, we have advanced equipments and experience so that the stable supplies, the quality guarantee as well as the flexible ways doing business can be reached.

Plastic Kitchen Cutlery Tray Insert This tray is perfect for organizing flatware and gadgets. It has separate comppartments for knives,forks,spoons and extra kitchen utensils. 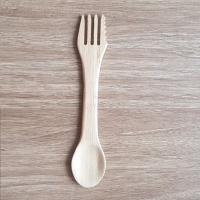 New design of cutlery for travelling. 100% bamboo. 50,000,000,000 pieces of single use plastic cutlery is thrown away every year ! Solution? Our 3 in 1 Reusable Light Bamboo Spork