Clear All Selection
Browse spice-seeds suppliers by country and region. 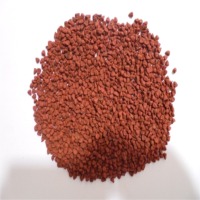 Annatto, sometimes called roucou or achiote, is derived from the seeds of the achiote trees of tropical and subtropical regions around the world. The seeds are sourced to produce a carotenoid-based yellow to orange food coloring and flavor. Annatto is commonly used in Latin American and Caribbean cuisines as both a coloring and flavoring agent. Central and South American natives use the seeds to make body paint and lipstick. For this reason, the achiote is sometimes called the "lipstick-tree". Achiote originated in South America and has spread in popularity to many parts of Asia. It is also grown in other tropical or subtropical regions of the world, including Central America, Africa and Asia. Annatto is a naturally intense dye which can range in color from bright yellow to deep orange. Many commercially made food products utilize annatto for its potent color.

Spices and organic products.Transportation and shipping

Olive oil, canned seafood, spices, mullet fish roe, soap and cleaning products base, detergents, shea butter , ketchup, mayonnaise , mustard.The bridge international Company is a distribution and Trading company ; with reliable partners ou company can guarantee the quality of the products we provide along with a full logistics assitance to guarantee the fluidity and efficiency of our transactions.

Specifications Organic Spices, Grounded Spices, Blended Spices, Branded Spices, Whole Spices Hing (Asafoetida) also known as devil's dung, it is a stony resin originally from Afghanistan used powdered. A strong smelling resin obtained from roots of medicinal plants. Piquant aroma, medicinal value and a unique taste are the basic features of Hing or Asafoetida. Packaging & Delivery Packaging Details: 250 gm 500 gm 1 k.g 5 k.g 20 k.g 25 k.g 50 k.g This spice is used as a digestive aid, in food as a condiment, and in pickle. It typically works as a flavour enhancer and, used along withturmeric, is a standard component of Indian cuisine, particularly in lentil curries, such as dal as well as in numerous vegetable dishes. It is especially widely used in South Indian and Maharashtrian cuisine, which is mainly vegetarian, and is often used to harmonize sweet, sour, salty and spicy components in food. Asafoetida also serves the purpose as a vegetarian alternative to make food taste more full-flavoured and savoury.[6] The spice is added to the food at the time of tempering. Sometimes dried and ground asafoetida (in very mild quantity) can be mixed with salt and eaten with raw salad. In its pure form, its odour is so strong the aroma will contaminate other spices stored nearby if it is not stored in an airtight container: many commercial preparations of asafoetida utilize the resin ground up and mixed with a larger volume of wheat flour:[7] the mixture is sold in sealed plastic containers with a small hole at the bottom, allowing the diluted spice to be dusted lightly over the food being cooked. However, its odour and flavour become much milder and more pleasant upon heating in oil orghee, acquiring a taste and aroma reminiscent of sautÃ©ed onion and garlic.[8] It is used especially by the merchant caste of the Hindus and by adherents of Jainism and Vaishnavism, particularly in Rajasthan, Gujarat, Karnataka and Maharashtra, who do not eat onions or garlic. It is used in many vegetarian and lentil dishes to add both flavour and aroma as well as to reduce flatulence.[9] It is however one of the pungent vegetables generally avoided by Buddhist vegetarians.

Black pepper is also termed as black gold.This spice is widely used all over the world for cooking purpose that adds the flavor of the dish and taste, particularly the indian dishes. Black pepper is processed in a very hygienic condition and meticulously packed to retain its aroma and freshness. Net 50 kilos in new PP bags.

We provide all kinds of seeds, especially pepper and tomato seeds. We have strong research power and several production bases, and have developed many varieties of hybrid seeds. 5g/10g/in bulk/in pouch/in tin